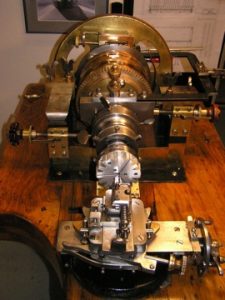 Stewart Jones has had a love affair with design and machinery from the past since first viewing and working on antique cars as a teenager. He now lives in Joseph, Oregon, in a house built in 1909, is refurbishing a 1950 Dodge four-on-the-floor B2B half ton pickup, and has added a circa 1860 Swiss rose engine lathe to his studio.

When in college in Eugene studying architecture, he learned about the oldest technique for working metal: fabrication – the cutting, bending and shaping of metals to produce one-of-a-kind works of great integrity. He left architecture, but combined his education in design with his education in the metals department to start a career as a jewelry designer and manufacturer.

The Swiss rose engine, a hand-operated ornamental lathe is capable of producing intricately detailed designs in metal. As a fabricator of gold, platinum and silver jewelry, his new love couldn’t be more perfect.

An article in Lapidary Journal in May of 2004 started it all. It described these antique machines and the work they produced under the direction of skilled craftsmen. Stewart was hooked. But years passed before he made the call to Bill Brinker of Boulder, Colorado, who was mentioned in the article, to ask about the availability of one of these machines.

Bill had bought his rose engine in 1999 from Lew Wackler, a well-known stone cutter, who bought it in 1989 from an antique machinery dealer in Providence, RI. It had been stored, disassembled, scattered among several tubs, and covered with long-dried grease and oil. At the time it was not clear how complete the machine was, though the major components required for basic functioning were present. In addition, there were several attachments, including an oval chuck for engraving elliptical patterns. Many weeks of cleaning, adjusting, and the making of numerous small parts were required to put it in working order. Since then many new rosettes have been created to increase the number of patterns that can be created, and several components have been restored to their original condition. 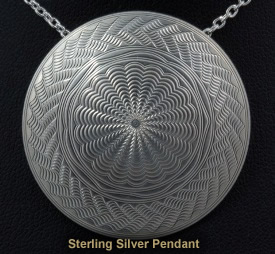 These machines are so rare that they come on the market only every few years. Bill was relieved to learn Stewart wanted to use the machine. Many are forgotten in back rooms and dusty basements or find their way into museums as curiosities, so the skills to work them are disappearing. This machine was built about 150 years ago in Le Locle, Switzerland and is marked by the maker, A. Uhlinger. As is typical, the base of the machine is wood, with a laminated hardwood top 4.5 inches thick standing on three stout hardwood legs. The headstock is capable of both rocking and pumping motions for flat and cylindrical work, respectively, and is fitted with a somewhat unusual brass pulley and worm gear. The slide rest is fitted with a sector arc for angular adjustment of the tool for perpendicularity to the work surface. 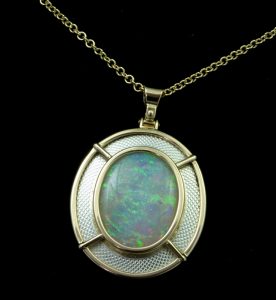 Since there were no manuals to guide the novice, Stewart traveled to Boulder for a week of hands-on lessons with Bill in September 2009. At the end of the week, Bill and Stewart broke down the rose engine into nearly 100 separate parts, photographing each step, and carefully packed them into Stewart’s car for the drive back to Joseph. “These are so rare, I just didn’t want to let it out of my sight,” he said.

As far as anyone can track, it seems there are only a few hundred antique rose engines left in the world. Most are in museums or private collections, admired but unused. Of the 100 or so that have been brought to the United States, less than half are in use, mostly by woodworkers. As these engines disappear from the public domain, the skill to operate them using precious metals also disappears.

For four days following Thanksgiving, Stewart advertised he would be giving demonstrations on the rose engine. Onlookers surrounded him each day as he slowly turned the hand-crank allowing the barrel to rotate and the rosette pattern to form through precision and patience. Since then, in addition to his usual fabrication work, he has created numerous pendants, bracelets and earrings using the rose engine’s engraving abilities. 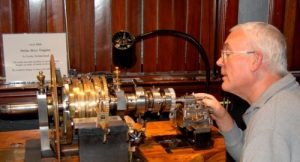 The rose engine and its complement, the straight-line engine, were made in England, France, Germany, and Switzerland starting in the late 1600s and reaching their height of complication in the late 1800s. For nearly three-hundred years, most of these machines were found in the castles and mansions of royalty, who used the arts as a way of elevating their own status. The aristocracy also supported what were called the houses of Cartier, Van Cleef & Arpels, Tiffany, and Fabergé. The designs one sees under the enamel on the famous Fabergé eggs were made using these machines.

This period was the apex of workmanship combined with quality ingredients. Once modern industrial mass production of the early 20th century took hold, and the aristocracy declined, the craftsmen with the skills and backing to use these techniques and machines became rare. A small number of metalsmiths strive to keep the skills viable and the engines working as they were intended. Stewart Jones, winner of the DeBeers Diamonds International Design Awards, the Diamonds Today Awards, and Letter of Outstanding Design from the Gold Information Center, New York, strives to be one of these metalsmiths.