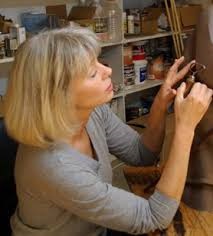 Shelley’s bronze sculptures are permanently installed in private and corporate collections and public parks across the nation, including New York City where her work is displayed in 5 parks.

In 1986 Shelley moved to the small town of Joseph, high in the mountains of Northeast Oregon, where the landscape is remote and inspirational.  After establishing her studio, in 1989 she poured her first crucible of molten bronze at Joseph Art Castings, a fine art foundry which she co-owned, built, and operated for six years.  Still a resident artist of Joseph, Oregon, Shelley has raised her children, become a teacher and advocate for the Arts, and been a community leader.
Shelley has pursued an ongoing education in the Arts through her own independent study.  Although her early college education culminated in a BS degree in Microbiology in 1973, her career in the sciences was short-lived relative to her passion for sculpture.  In addition to her stylized, representational wildlife figures, her work also includes a series of sculptures influenced by her interest in Taoism.

Hours
Currently Only Open
By Appointment